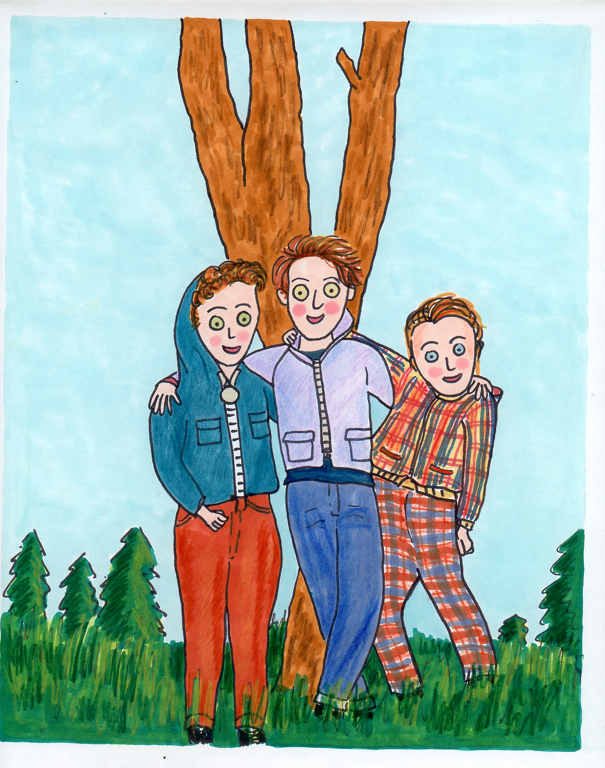 My very first day of school fell upon me like a curse. I thought six years old was pretty young for such a curse but apparently not. On that very same day my parents had to drive my brother James to boarding school, three hours away from home which meant that I would have to go to school like an orphan. In the playground, waiting for the bell to ring, my mother almost lost her skirt in public. I hung to it like a monkey from a branch over a thousand foot precipice. She said I was making a fool of myself in front of all the other kids and parents. I had to act grown up. I couldn’t be what I wasn’t. I was a first grade prisoner with no experience.

« Just for this once, Dorothy, be a big girl. » she said, « Your father and I have to drive your brother James to boarding school. I’ll be home before you’ve finished your first day. Promise. You won’t even notice I’m gone. No go be a big girl now. »

The first grade teacher was a witch. She screamed and liked to whack us behind the head for no good reason.   Someday someone was going to find the magic formula that would make her shrivel up and disappear like in that other story with Dorothy and the red shoes.

In my class, there was a girl named Benedict, like the eggs. She sat next to me in the second row by the window. She was small and pretty skinny for a first-grader. From where I sat, I could see the kitchen window of my house just across the school yard behind the fence. Sometimes I could see my mother doing the dishes or baking pies. Benedict also spent a lot of time looking out the window. She had dirty blond hair and wore pigtails. Pigtails gave me headaches and long hair gave my mother a pain in the neck, so mine was kept short. Benedict had thick glasses that made her eyes look too big for her head, like when you look at someone through a fish bowl. Her bottom lip was all chewed up and sometimes it would even bleed a little. She said it tasted sweet like gum.

Once a week, usually on the day we would have a test, Benedict would turn a pale shade of green, throw up all over her desk and spend the rest of the day in the nurse’s office. Once, she was looking out the window daydreaming when the witch snuck up behind her. Her thin boney hand came down on Benedict so hard that all we saw were pigtails spinning around her head like a tornado ripping through a field of corn.

Benedict was sent to the nurse’s office and the teacher’s dress to the cleaners.

A Study of Art and Artists in Houston, Texas

Living a Soulful, Heartful and Artful Live - with every Breath

No packaging. Nothing processed. No waste.

Plant a Seed, Change the Law

from the newstead community garden

Thought Catalog is a digital youth culture magazine dedicated to your stories and ideas.